Oh the humanity....seriously, Caspter the cat who rode buses in southwestern england was run over. the bus drivers knew which stops to let him off, the passengers loved him. funny how we become so attached to animals. I was disappointed to hear of this. The same day, 35 dead in Baghdad from timed bombs, obviously well planned, but I didnt read about this because it was too depressing.
Posted by Dude at 1:00 PM No comments: 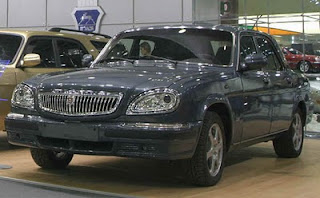 Yes, a GAZ Volga, fresh off the Russian assembly line. I cant wait to receive it, it is now on a tramp freighter leaving St. Petersburg, should arrive in Houston TX in about 3 months, if the boat doesnt sink first. I like the styling, esp the straight axle rear end with stagecoach springs (abandoned even by pickup trucks in the US, finally). the color is ok. do you think they have an external jack for my ipod, or just a standard shortwave radio? The ethnic eastern european immigrant women in pittsburgh will be impressed by elegant new ride.

seriously, what are they thinking?
Posted by Dude at 9:34 AM No comments:

Cats are superior in evolution to "H.Sapiens"

My cat, Dolce, always teases me about his evolutionary superiority, how he has me feeding him, cleaning his kitty litter, how well trained he has me. Here is more proof about the long lineage and great genes of cats:

Archaeologists have unearthed a 2,000-year-old temple that may have been dedicated to the ancient Egyptian cat goddess, Bastet, the Supreme Council of Antiquities said Tuesday.

The ruins of the Ptolemaic-era temple were discovered by Egyptian archaeologists in the heart of the Mediterranean port city of Alexandria, founded by Alexander the Great in the 4th century B.C.

The city was the seat of the Greek-speaking Ptolemaic Dynasty, which ruled over Egypt for 300 years until the suicide of Queen Cleopatra.

The statement said the temple was thought to belong to Queen Berenice, wife of King Ptolemy III who ruled Egypt in the 3rd century B.C.
Posted by Dude at 11:24 AM No comments:

GM about to kill SAAB

how could SAAB not sell with quality cars such as this? or this, the special camper edition?
Posted by Dude at 11:32 AM No comments:

Why Haiti is poor, and why Pat Robertson is an idiot 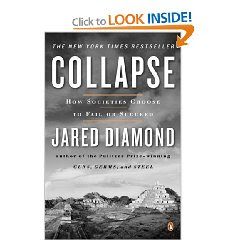 In the book shown the argument is that Haiti and the Dominican Republic have different histories of settlement, that Haiti was settled by France, a slave colony, became over populated, destroyed natural resources, while Dominican Republic settled by Spain, more European settlement, no slavery, and although it had a dictatorship in 20th century the dictator nonetheless preserved natural resources, like trees, rivers.

The solution: too many people on Haiti. Take at least half of them off. Send them somewhere (the moon?) recover the natural environment (would take about 50 years) import European-North Americans who are familiar with democratic institutions (like israel has done) and rely upon lots of private sector financial resources (wealthy people, charities, western nations) and then haiti has a chance.

Unrealistic? of course. but that is the solution. Haiti is hell on earth, people created it (French), people ruined that part of the island, much of it has to do with Slavery, which Abraham Lincoln (see the 2nd inaugural address) said was a national sin that deserves God's wrath.

So pat robertson not only is an idiot, he also doesnt know history - you know, he COULD go to a library and read a book, like the one shown above, but NOOOOOOO.
Posted by Dude at 7:59 AM No comments:

Matt Lauer is an idiot 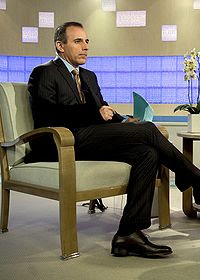 Matt Lauer attended Ohio University, was 6 credits short of graduation, his major is unclear but he was in the Telecommunications dept (TV i guess). He is listed as a "journalist" but got his start as a TV producer in Huntingdon WV and as a TV reporter in that city. He also had a talk show in NYC, and was news anchor in NYC. He is co host of Today Show. He is one of those TV "news celebrities" who think they are journalists, but are not (like Katie Couric, who asked Sarah Palin about the magazines she reads, like since she is a woman she reads Womans Day or something like that, who the hell reads "magazines" anymore? what a dumb question, even I would be speechless at a question like that). Any who, Matt Lauer and John Mc Cain went at it earlier today and McCain wanted to talk about war and the economy, and Lauer wanted to talk about the latest gossip political book and you can see it at the previous link. McCain answered Lauer's questions 3-4 times, and Lauer keeps asking the same shit. The idea is to create controversy, to create news, not to report on it. Lauer is vaccuous, BTW, he received his degree from Ohio Univ 20 yrs later, when he was commencement speaker, and the univ considered his TV jobs as experience for the 6 credits he was short. what an asshole.
Posted by Dude at 11:37 AM No comments: 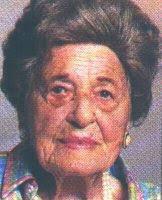 The holocaust survivor who was "in charge" of Anne Frank's barracks dies. Perhaps they are together again, only this time in a paradise (its a nice thought). Her story is so very sad.

One of the children in my barracks toward the end of the war was Anne Frank, whose diary became famous after her death. I didn't know her family beforehand, and I don't recall much about her, but I do remember her as a quiet child. When I heard later that she was 15 when she was in the camps, I was surprised. She seemed younger to me. Pen and paper were hard to find, but I have a memory of her writing a bit. Typhus was a terrible problem, especially for the children. Of 500 in my barracks, maybe 100 got it, and most of them died. Many others starved to death. When Anne Frank got sick with typhus, I remember telling her she could stay in the barracks - she didn't have to go to roll call.

There was so little to eat. In my early days there, we were each given one roll of bread for eight days, and we tore it up, piece by piece. One cup of black coffee a day and one cup of soup. And water. That was all. Later there was even less. When I asked the commandant for a little bit of gruel for the children's diet, he would sometimes give me some extra cereal. Anne Frank was among those who asked for cereal, but how could I find cereal for her? It was only for the little children, and only a little bit. The children died anyway. A couple of trained nurses were among the inmates, and they reported to me. In the evening, we tried to help the sickest. In the morning, it was part of my job to tell the soldiers how many had died the night before. Then they would throw the bodies on the fire.

I have a dim memory of Anne Frank speaking of her father. She was a nice, fine person. She would say to me, "Irma, I am very sick." I said, "No, you are not so sick." She wanted to be reassured that she wasn't. When she slipped into a coma, I took her in my arms. She didn't know that she was dying. She didn't know that she was so sick. You never know. At Bergen-Belsen, you did not have feelings anymore. You became paralyzed. In all the years since, I almost never talked about Bergen-Belsen. I couldn't. It was too much.
Posted by Dude at 10:31 AM 4 comments:

I was caught jogging in DC ! 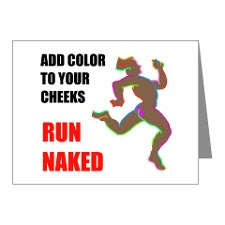 WASHINGTON - A man was taken into custody and later hospitalized for a mental evaluation after he took off his clothes and began a jog a few blocks from the White House.

The man was seen taking off his clothes Wednesday evening around 5 p.m. He left the clothes near the northeast corner of the Ellipse, the green space south of the White House.

Secret Service spokesman Darrin Blackford says the run lasted less than a minute before the man was apprehended. The president was at home at the time. But Blackford says the man, who left his clothing in a duffel bag, did not make any threats. His bag was declared suspicious, but its contents were found to be harmless.

the mental eval concluded i was delusional, however, that is perfectly normal for a college professor, so they released me. fully clothed, of course.
Posted by Dude at 1:50 PM No comments:

Just in time for Christmas: The FU guy on Letterman

This sums up my feelings about Christmas, the FU guy on letterman. Also here again.

I just never tire or seeing that guy perform. Great.
Posted by Dude at 2:23 PM 1 comment: