Nancy Reagan: the banality of evil in a little red dress finally dead.

Yes, Nancy Reagan just died, and all the politicians have praise for her.  Her are some none praiseworthy things:  the "just say no" to drugs campaign was stupid, he husband national security team had CIA teams bring drugs out of Nicaragua to keep the Gen. Noriega anti communist: CIA also had mercenaries fighting in El Salvador, Guatemala, Honduras, and mercenary militias ("Freedom Fighters") we could call them terrorists now invading Nicaragua from the north and south.  All this because of the "domino" theory, that once Nicaragua went Red, Cuba would start to control the entire peninsula and the US Army would eventually have to fight a communist invasion of Texas (Reagan actually said that).  Also deregulating savings and loans which made many people rich, including members of Congress, before the crash: the savings and loan bailout cost the average american taxpayer something like $3400 each (if I remember correctly).  Then there was the bombing of Lebanon from the USS New Jersey, a WWII battleship that was vaguely lobbing artillery at places where bad guys probably were, but ended up hitting mostly civilians.  In retaliation,  the Marine barracks was truck bombed killing hundreds of marines.  The Marines were stationed in Beirut, in a low area, surrounded by hills and the sea. sitting ducks, and were NOT ALLOWED to load their guns, don't wanna make a marine trigger happy.  What were they there???? If for show of force put them off shore on ships, if they are on land then you must plan to use them militarily, but then they need weapons with real bullets.  After loading the caskets, Reagan evacuated the remaining live marines.  Two days later he invaded Grenada, also a "domino" for the Cuban take over of Texas.  And Nancy was often mispercieved (by her self and others) as being the President's chief of staff, in fact some CHO's resigned because of her.   She also cheated on Ronnie with Frank Sinatra, but this was Hollywood and I am sure Ronnie had a few coke and champagne fueled threesomes.  These are horrible people who have done horrible things and when they die we honor them.  Good riddance.


Nancy Reagan going for a walk with Salvador Dali, on of her many lovers 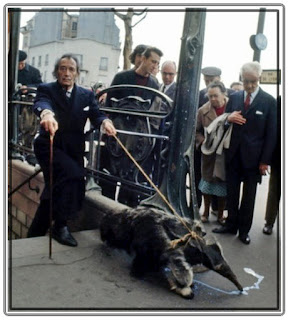