Ted Kennedy: his death, he should have driven a VW Bug 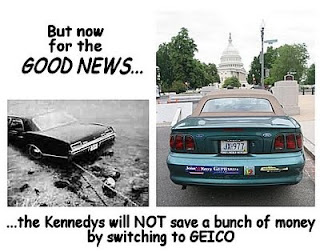 Here is my past entry about Ted Kennedy and the Chappaquiddick scandal.

I agree with the analysts, that Sen. Kennedy became a very effective, moderate voice in the US Senate after his marriage to Vickie Reggie. I think she saw the potential in him. I think the assassination of his brother Robert was what pushed him over the edge. His loneliness, the drinking, the infidelities, became his own perfect storm.

His behavior after Bobby's death, up to and including his run for the Presidency in 1980, are his worst years. Described as the last true liberal in the US Senate, he forgot his brother John F. Kennedy was no liberal, but a moderate. His father, Joseph P. Kennedy, was no liberal, broke with FDR over many things, including the socialist policies of the new deal,and of course, the alliance with Britain before US entry into WWII - Joe didn't like the english (he was irish) and thought we should tilt toward Germany. Which is why FDR essentially fired him from being ambassador to britain.

I think many people like Ted because of his brothers - the real Ted Kennedy didnt emerge until after his marriage with Vickie. He finished his life well. Perhaps that made up for the failings earlier in his life, as a husband, father, and US Senator.

So god bless him, he did the best he could given the family he was born into, and many people have benefited from his work in the US Senate.
Posted by Dude at 11:12 AM No comments: 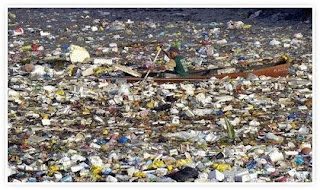 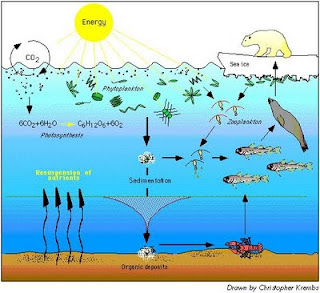 While scientists have documented trash's harmful effects for coastal marine life, there's little research on garbage patches, which were first explored extensively by self-trained ocean researcher Charles Moore just a decade ago. There's also scant research on the marine life at the bottom of the food chain that inhabit the patch.

But even the weather-beaten, sunbleached plastic flakes that are smaller than a thumbnail can be alarming.

"They're the right size to be interacting with the food chain out there," Goldstein said.

The team also netted occasional water bottles with barnacles clinging to the side. Some of the trash had labels written in Chinese and English, hints of the long journeys garbage takes to arrive mid-ocean.

Plastic sea trash doesn't biodegrade and often floats at the surface. Bottlecaps, bags and wrappers that end up in the ocean from the wind or through overflowing sewage systems can then drift thousands of miles.

The sheer quantity of plastic that accumulates in the North Pacific Gyre, a vortex formed by ocean and wind currents and located 1,000 miles off the California coast, has the scientists worried about how it might harm the sea creatures there.

A study released earlier this month estimated that thousands of tons of plastic debris wind up in the oceans every year, and some of that has ended up in the swirling currents of the Great Pacific Garbage Patch.

Katsuhiko Saido, a chemist at Nihon University, Chiba, Japan, told the annual meeting of the American Chemical Society last week that plastic actually does decompose, releasing potentially toxic chemicals that can disrupt the functioning of hormones in animals and marine life.

The Scripps team hopes the samples they gathered during the trip nail down answers to questions of the trash's environmental impact. Does eating plastic poison plankton? Is the ecosystem in trouble when new sea creatures hitchhike on the side of a water bottle?

Plastics have entangled birds and turned up in the bellies of fish, and one paper cited by the National Oceanic and Atmospheric Administration estimates 100,000 marine mammals die trash-related deaths each year.

The scientists hope their data gives clues as to the density and extent of marine debris, especially since the Great Pacific Garbage Patch may have company in the Southern Hemisphere, where scientists say the gyre is four times bigger.

"We're afraid at what we're going to find in the South Gyre, but we've got to go there," said Tony Haymet, director of the Scripps Institution.

Only humans are to blame for ocean debris, Goldstein said. In a blog entry posted a day before the science ship arrived in Newport, Ore., she wrote the research showed her the consequences of humanity's footprint on nature.

"Seeing that influence just floating out here in the middle of nowhere makes our power painfully obvious, and the consequences of the industrial age plain," she wrote. "It's not a pretty sight."
Posted by Dude at 11:07 AM No comments: 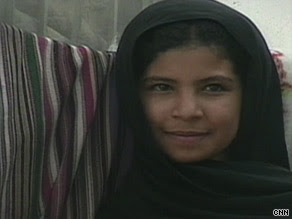 10 yr old Nujood was married to an old man by her family. Her family is poor, lives on less than $1 a day. after two years of rape and beatings, she escaped and went to a court, sat outside until a judge would talk to her. The judge surprising arrested the father and husband, and after the trial hearing, granted Nujood a divorce. Catch is, her dad has to pay $200 to the ex husband under Saria law as compensation (for a defective wife I guess). Meanwhile....Najood has become a spokesperson for exploited child brides everywhere, has received donations for schooling. However, her family says they dont have the money to send her to private school for transportation or something. Nujood is mad, angry, refuses to go to school (abused children are often angry and mad). So, no happy ending. child marriages continue in many countries. Families are poor, "selling" a child relieves them of a burden, they hope their child will be well taken care of by the "rich" man who buys her. This must also go on in Afghanistan. there are parts of Afghanistan and Pakistan, by the border, where it doesnt seem any "law" exists in some constitutional sense. Its the law of their own parochial version of Islam and tribal customs. I cant see how the US can change this.

But thats not to criticize the Afghanistan invasion, I think we should have invaded after the USS Cole attack in 1998, but Pres. Clinton was busy at the time ( denying he likes his own version of child brides, women younger than his own daughter ).
Posted by Dude at 1:51 PM 2 comments: 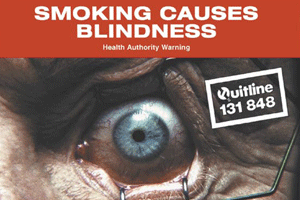 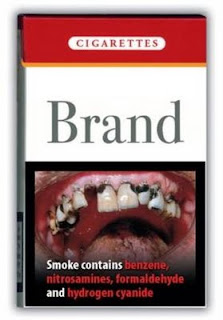 I love the movie, Thank You for Smoking, I LMAO all through the movie. I esp liked the scene at the movie producers corp office,a shinto monk raking sand in a japanese garden, and the young cocky assistant says, "That sand won't rake itself, Meiko" or something like that. The incredible BS facade of new age corporate hipness. anyway, Pres Obama, who still sneaks out of the oval office to have a smoke in the rose garden, signed into law a bill that would give the FDA much more power to regulate cigarettes. One thing up, is warning labels. The US has the weakest warning labels of any country in the world. So get ready for the pics you see here, from Brazil, a country with the most graphic warning labels.
Posted by Dude at 8:25 AM No comments: 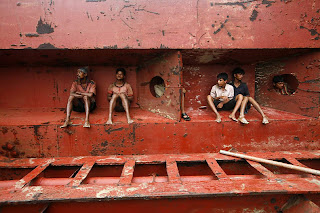 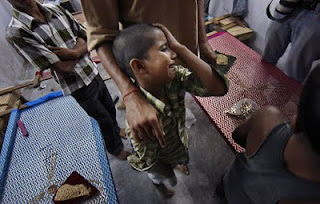 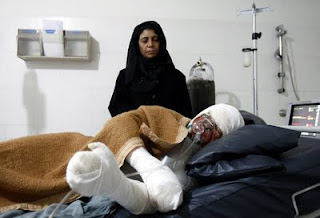 When I get depressed about my life, I reflect on the lives of others around this planet. Here are three pictures: (1) a mother is watching over her burned young daughter, who was forced to marry a 70 yr old man, but was discovered with a young man her age, and her family now disgraced, she decided to burn herself to death, unsuccessfully; (2) a boy rescued from a child labor factory in India (3) bangladeshi workers taking a break from dismantling a ship, full of toxic waste, by hand using hammers and welding torches.

"Tulpan" a movie from Kazakhstan

This is an amazing movie, (trailer here) about following your dream, even if it isnt someone else's dream. Asa is a sailor, who wants to manage a herd of sheep in the Steppes of Kazakhstan. That in itself is a twist. Asa lives with his sister and her family until he c an get his own place. however, to do that, the "boss" who finances herds wants him to get married, because life is harsh on the steppes, and poor, and he needs a wife to help him survive the life of a herdsman. Asa is in love with Tulpan (who we never see - she is the unknown beauty he imagines he wants to marry) but Tulpan and her mom have a different dream for her. Asa loves life on the steppes, such a harsh, barren landscape, but he sees the beauty in the land. He lies back, on his back, and feels the earth beneath him, the sky above, he is "anchored" you could say on the land. in the end, no spoilers here, he follows his dream. Will he achieve happiness? His sister and her husband dont seem very happy, they are poor, nomadic. Will Asa also experience this? Will his dream result in unhappiness, frustration? Isnt that a universal paradox, that our dreams can never be realized, that life is chasing our dreams, and we have to find happiness where we can, our dreams are ephemeral. So I almost cried just before the ending, but then the ending occurred, and I took consolation in the human spirit - believe in yourself, have courage, suck it up, follow your dream. great movie. I loved it. absolutely beautiful.
Posted by Dude at 8:44 PM No comments:

Muslim woman thrown out of public pool in France 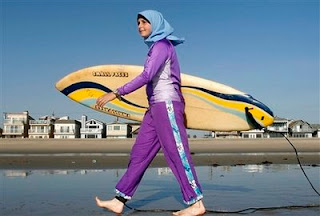 So this woman wanted to swim, but wore her burguini, head to ankle covered swim attire. France does not like fully covered women, its the law, Pres. Sarkozy thinks it imprisons women. France has a large muslim minority, the results of its collapsed empire. I understand the public health issue, you dont want street clothes being worn in the pool. But as long as the woman changes into this in the dressing room, as long as she showers first with it on, why not? Dress codes are hard to enforce, and I know if muslim women can wear a burguini to the pool, some knucklehead will try to wear his street clothes into the pool just to be a jerk. but cant we all just get along? Muslim women cover up out of modesty, before their god, its a sign of humility and reverence. thats what some young muslim college students told me. they are proud to cover up. There has got to be a solution to this. our local high school does not allow any religious insignia to be worn, not cross necklaces, nothing. but what if a muslim woman wanted to wear a hijab to high school? or a jewish young man wanted to wear a kippah to high school?

Isnt there some middle ground here?
Posted by Dude at 11:13 AM 2 comments: 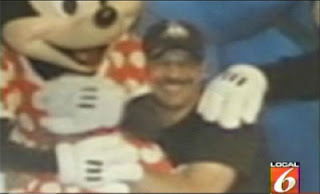 ORLANDO, Fla. -- A 60-year-old Pennsylvania man has been convicted of groping a woman in a Minnie Mouse costume at Walt Disney World.

John William Moyer of Cressona, Schuylkill County, told the judge he is innocent. His son said before sentencing that his father would never inappropriately touch a woman.

He was convicted today of misdemeanor battery and sentenced to write the victim an apology, serve 180 days probation and complete 50 hours of community service. Mr. Moyer must also pay $1,000 in court costs and possibly undergo a mental evaluation.

The victim says she had to do everything possible to keep Mr. Moyer's hands off her breasts.


When I first read the headline I thought, "I haven't been anywhere NEAR Disneyworld for years." But it was someone else, in the picture. The guy gropes minnie mouse WHILE his picture is being taken. The Horror. The Humanity.
Posted by Dude at 7:07 PM 1 comment:

Here is William Shatner reciting Sarah Palin poetry. He is the man.

If you liked that performance check out more shatner performances here.
Posted by Dude at 9:51 AM No comments: